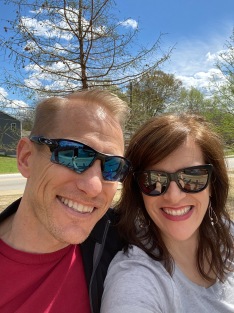 This is going to be the most unusual Easter I’ve ever experienced.

I bet a lot of you would agree with me.

Since I practically cut my teeth on church pews, I can’t remember an Easter I wasn’t in church with all of her Easter lily glory.

Church was always the only option, until now.

Now what do I do?

All of the parks and trails are closed in my area, so any kind of time in nature is out.  Of course, there’s always the back porch.  We could sit out there and sing some hymns together as a family.  It sounds so good in my head but I can only imagine how my twenty something year old children would react to my idea.

We could have an egg hunt.

I’ve been scrolling through Instagram reading all of the inspirational posts of Influencers I follow and they are coming up with some really great ideas.  Making crosses out of palm leaves, arranging scavenger hunts that end with the telling of the resurrection story, special meals, sending letters out to tons of people to tell them of God’s love.

And then there’s me.

I thumb through my recipe app looking for low sugar desserts to eat after online church.

I do have one shining memory of a creative Easter.

When our children were about six, nine and eleven respectively, I decided I wanted to make Easter Sunday more meaningful for us.   At this time we lived in Sanford, FL and my husband was working hard toward his pilot’s license.  We were poor as church mice, but living in the adventure of a fresh start.

I was at a place in my life where I wanted new traditions and I wanted to try new things.

So, I decided we would recreate the breakfast Jesus had on the beach with Peter and John after he had risen from the dead.  Even though this breakfast did not happen until a week or more after he had risen, I still thought it would be a neat way to start off Easter Sunday.

So, I spent the week before Easter preparing for our “breakfast on the shore.”  I figured we’d rise before the sun and trek out somewhere to eat fish and talk about what it meant to eat with Jesus on the sandy beach.  I tried to imagine the salty wind blowing through their hair and waves crashing to the shore beside them as they laughed and ate.

I thought so too.

So I baked the fish the night before and put it in the fridge.  I got a loaf of bread and put butter on several pieces, probably not appropriate for Bible times, but, oh well, bread without butter is nearly unforgivable.  I grabbed bottles of water and loaded all of this into an old picnic basket.  I set my alarm and went to sleep quite proud of my endeavor.

This would be an Easter morning for the books.

I woke up to the rude honking of my alarm while it was still dark outside.  I really wanted to see the sunrise, so I crawled out of bed, all the while questioning why I had ever thought this was a good idea.  I struggled to find the light switches and finally made it to the kitchen.  I pulled my fish out of the fridge and put it in the microwave, just to knock the chill off.

Public service announcement: The smell of fish before the crack of dawn is not advised.

Then I crept into the kid’s room and started waking them up with a gentle nudge that turned into a complete meltdown.  Not the start to the morning I had envisioned, but, still I pressed on.

I barked at them to get dressed so we could go celebrate Jesus.  In hindsight, that probably wasn’t the best way to motivate them.   Nevertheless, they got dressed out of fear more than desire, and lined up at the door.   I’m sure we looked ridiculous in our mismatching outfits and our bed hair standing on end, but who cared?  This was not for man’s approval, this was all for the glory of God.

Since I had only thought this through a little, it didn’t occur to me the park near our apartment would be closed.  So, we spread our old blanket out on the tennis courts.  I mean, hey, it was green like grass.    The morning dew made our flimsy blanket stick to the ground like saran wrap sticks to itself.

We wrestled it until it submitted and laid in heaps and mounds on the lined surface.

I pulled out our plastic plates, utensils, and bottled water and proceeded to set it all up while directing each kid where to sit.  Once we were situated, I pulled out my Bible (this was way before Bible apps) to John 21.  I began to read with conviction about Jesus cooking on the beach for his disciples after he had risen from the dead.  When I finished the passage I looked up from the sacred text and there they sat staring blankly at me, blurry eyed because of the early hour.

Next, I pulled out the fish and bread. I thought our adventure would be so similar to the story they’d just heard, they would be amazed. They would talk and talk about how it must’ve felt to be on that very beach with Jesus and his disciples.

This beautiful scene was unfolding in my head, and then I took a bite of the fish.

It was still cold in the center and tough around the edges.

The kids didn’t say anything out loud, but, their faces said more than words ever could.  In time we all choked down the fish and followed it with our buttered bread.  Oh, and I forgot to mention we also had boiled eggs.  Did they have those in Bible times?  Someone look that up and let me know.  Then we sat in pretty much silence, swatting away the occasional bug coming in for the leftover food.

When the last bite was finally gone, I packed up our basket, grabbed the blanket and headed for home.  It was only a few feet from the tennis courts, and I couldn’t wait to get there.  We showered and dressed for church, then sat sleepily as the minister shared with us the good news of a risen Savior.

We never really talked much about our “beach” breakfast in the years to come, it wasn’t until the kids were practically adults that I heard how they really felt.  Let’s just say if it were an event on Yelp it wouldn’t receive a five star review from any of them.  Although, they say with compassion, “we know you were trying, Mom.”

That Easter breakfast has been good for many laughs.  But, you know what, I don’t mind…at least they remember.

And isn’t that what the Lenten season is all about?  Remembering what Jesus has done for us.

And then celebrating our RISEN LORD!

I think if I ever recreate this breakfast in John 21 for my grandchildren, I will fry the fish.  I’m going to keep it true to my roots and I think fried will warm up better in the microwave.

4 thoughts on “Easter, With a Side of Fish”