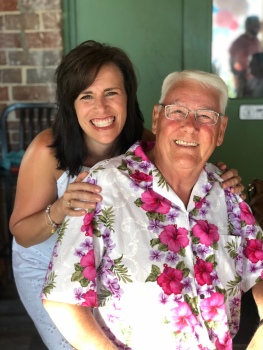 I don’t recall a time in my life when my daddy wasn’t a preacher.

I’m told I was about five when he and Mom sold everything they had, packed up a Uhaul, and headed to Colorado Springs to attend Bible College.

You know, I’m still amazed when I think about that.  My mom was always so reserved, almost shy.  But, clearly, she had guts.  I mean, who packs up their whole house, sells everything and moves across the country with three children with no job and or place to live waiting for them?

The planner in me curls into the fetal position just thinking about it.

As a mother of young adults, I ask myself what their parents thought of this plan? Or lack of plan? Or whatever was going on here…

I can just imagine the conversation.

“Colorado Springs, there’s a Bible college and we’re going back to school because we feel called into ministry.”

“Oh. (Dramatic pause to make a point.) You have good jobs and a home here, do you have a job there?  A place to live?”

“No, we have neither of those things.  The Lord told us to go, so we’re going.  He’ll provide.”

“Let me get this straight, you have no real money, no job, no place to live, three children and you’re taking off on the promise that the Lord will provide?”

(Long silence.)  “Yes, I’ll pray….pray you’ll get some sense knocked into your head.”

Of course I have no idea if it actually went this way…maybe I’m thinking how I would feel if it were my kids.  And as a follower of Jesus, I feel embarrassed to admit that.  Why is it so shocking when people step out in faith?! Why don’t we celebrate it instead of discourage it?

Something to think about.

So, Mom and Dad and three little ones arrived in Colorado.

Mom said they drove straight through from Florida to Colorado because they had no money for a hotel.  Can this story get any more touching?  They were young, the kids were young.  Some might say they didn’t know any better than to trust God would provide.  They hadn’t lived enough life to know we have to use common sense.

But I choose to believe they knew EXACTLY what they were doing.

They packed up a truck and backed out of the driveway, trusting in a promise that no one else quite understood.

Upon arrival they enrolled in Bible College and found a basement level apartment.  Dad then found a part time job at a grocery store.  He cleaned the store at night and attended school during the day.  The apartment was small so we had to be real quiet when Daddy was sleeping.  Because there was no washer or dryer Mom had to wash the clothes in the bathtub and hang them to dry all over the small dwelling.

When Mom told this story I don’t remember her complaining about the living arrangements, she knew in her heart it was exactly what they were supposed to be doing.  All of the inconveniences were part of the journey to the life God had in store for them.

I honestly believe it became her sacrifice of praise to the Savior she loved so much.

“For I know the plans I have for you,” declares the Lord, “plans to prosper you, not to harm you, plans to give you a hope and a future.”

She trusted and had hope for our future.

The years flew by and hardship always prevailed during this season.  The Lord did always provide, but it wasn’t easy.   I’m sure the lessons learned while leaning so heavily on God were foundational for the life of ministry ahead.

I remember living in Louisiana.

It was my dad’s first church assignment fresh out of Bible College.

He was definitely a “freshie.”

There were a lot of Cajuns in New Iberia, LA and they spoke their own special kind of English.  Kind of like English with a French flair.  I loved our little singlewide snuggled up next to a giant ditch that separated us from a cow field.  I spent many hours running those fields and picking black berries from the ditch.  Broken white shell was used to cover driveways and country roads instead of rock or concrete.  They were sharp as a blade but before we moved I was able to run across them like they were carpet.

I have good memories of flying across the broken shell driveway, my stringy brown hair swinging behind me, to play with my best friend across the street.

They were good days from a kid’s perspective.

The next move landed us in Forest City, Arkansas.

We lived in a giant two story house, a far cry from the snug singlewide in Louisiana.

Next to the house was a giant hill, and we spent many a day sliding down it on flattened cardboard boxes. If you’ve read my blog, you know I found the communion wafers in the fellowship hall and used to sneak in the kitchen to eat them.

Lord, forgive me, they were just so good!

After Arkansas we moved to Pace, Florida.

We spent a number of years in the panhandle, it was here I graduated high school.  Daddy loved this area since it was so close to where he grew up.  It’s safe to say my daddy will always be a Florida boy at heart.  He loves the smell of salt water and to him there’s nothing better than backing his boat into the water.

Especially if it involves a fishing rod.

When we made another move it was deeper into the peninsula of Florida.

Archer, Florida was a hop, skip and a jump from Gainesville. And this is where his love affair began with the Florida Gators.

Ever heard of ‘em?

It was during his long stay in Central Florida that he became a Gator MEGA FAN. If this is not a term I think it should be.  It is the only phrase I can think of that adequately describes him.  He has worn his Gator tie to church more than one Sunday morning.  I think at one point he even had an orange blazer although I’m not sure.

The last move he made in his long, prestigious ministry was to Brewton, Alabama.

He’s lived here by far the longest and has fallen in love with the area as well as the church.

It was in Brewton he lost Momma.

I’ve shared with you again and again how much he loved her and how he sat by her side until the very end.  She was his partner, his love, and worked right alongside him in ministry.  She believed great things for our family and God has honored her prayers.  There’s no telling where I might be had it not been for her good example and longsuffering for an immature girl who wanted to be good but struggled with obedience.

I’ll always look back on those days of Mom’s sickness as the most bitter of my life thus far.  But, I heard a great quote recently that has helped me to put her life and seemingly untimely death into perspective.

“You’re either praying for a miracle or you are the miracle.”

Momma was and is the miracle.

These days made a deep impression on us all and we will never be the same.

I would be leaving an important part of the story out if I didn’t tell you God has brought a precious woman into my dad’s life.  He is happily married these days and I will sing Hallelujah forever because of it.

You see, it doesn’t always end up the way you planned, but it is God’s plan, and HE KNOWS BEST.

When I think back on it, Daddy has had a successful ministry.  He’s touched countless lives and has led the charge in building some sort of building everywhere he pastored.  I have vivid memories of him and Momma laying cinder block at the small church in Pace, FL.  They were building a sanctuary and the volunteer list was short.  He and Mom went out on almost a daily basis and worked hard in the Florida sun.  Before they left for the next assignment, a new church building was standing.

He’s slept in hospitals when a church member was ill.  He’s eaten in more homes than I could ever count.  He loves fried chicken, btw, in case you want to have him over.  He would want you to know he has to eat baked chicken these days to keep his sugar regulated, something he’s not real happy about.    He’s prayed over sick children, baptized hundreds, preached thousands of sermons, loved on mean folks, been talked about good and bad, visited nursing homes and sat by the bedside of the dying.  He’s been prayed for, prayed about, he’s led many to Christ and I am convinced we’ll never fully know his impact until we get to heaven.

Daddy has a thousand colloquialisms, but one of his favorite things to say is, “Well, if they’re talking about me, then they’re not talking about someone else, so let ‘em talk.”

He loves deep and his humor has helped him to keep his sanity.

We don’t go ANYWHERE without running into someone he knows.  “Hey, preacher.”  Words carved into my mind because I’ve heard them thousands of times.  And every time, he stops and takes time for the person calling out to him.

He told me he plans to retire the pastoral side of ministry but he will always be a preacher.

All in all I’d say their step out into faith was a raging success.  God provided again and again.  They touched countless lives because they had the faith of a mustard seed.  Some called them ignorant, some said they were crazy, others called them irresponsible.

But, God called them to go.

And because they trusted, they saw God work in amazing ways.

I’m so glad they listened.

12 thoughts on “The Preacher”