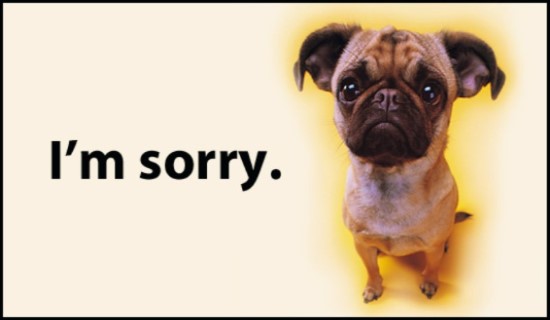 I stood in the hall with a lump in my throat, thoughts whirling in my mind.  The conversation had been going well until she said those last three words, “Don’t tell anybody.” As soon as I heard them, my stomach dropped.  I felt a little sick because I knew what she didn’t, I had already told somebody.  The thing was, I struggled with whether or not to tell her I’d already let the cat out of the bag.  I knew it would disappoint her and maybe even make her mad to know I’d already shared news that wasn’t really mine to share.

Our conversation weaved in and out of a few shallow topics before I gave in to what I knew I had to do.  Around the tightening in my throat, I squeaked out a confession that I’d already shared her news.  I could hear the disappointment in her voice as she struggled to maintain composure, I also knew what she said next could change a lot of things about our relationship.

Before she could speak, I blurted out “I’m sorry.”

In the back of my mind I wondered what the big deal was, the news was going to get out anyway.  But way down in my heart I knew I’d been overly excited about the good information and shared it with enthusiasm and without permission.  The call ended pretty quickly after my confession and I was left standing in the hallway, my phone to my ear with only silence on the other end.

The words “I’m sorry” rung in my ears and a part of me rebelled against the sound of them, or maybe it was the feel of them, I wasn’t really sure.

I wanted so badly to defend myself, wanted to say I hadn’t been warned to keep quiet until it was too late, but every time the self-protective thoughts came to mind I halted them and spoke the truth to my wounded pride.

The inward tug of war led me to an age old question I’m pretty sure I don’t have the answer to, why is it so hard to say I’m sorry?  Why do those two words have the power to leave a bitter taste or invoke feelings of exhilaration?  In my situation, I didn’t want to be sorry, I wanted declare my innocence.  I wanted to flip my hair and walk away, never really taking any responsibility for the hurt and disappointment I’d caused.  But, I’d made a promise to myself recently to be more transparent, more willing to confess and own up to my mistakes.

More willing to be sorry.

I read a short article recently about people who struggle to say I’m sorry.  I don’t feel like I struggle with it all the time, but there are definitely days when those words do not want to slip off my tongue.  At times they get stuck in my throat and nearly strangle me to death.  In the article those who struggle to say I’m sorry frequently are called “non-apologists” and the very first reason the author gave for why there’s a struggle resonated with me.

Let me quote the author.

“Admissions of wrongdoing are incredibly threatening for non-apologists because they have trouble separating their actions from their character. If they did something bad, they must be bad people; if they were neglectful, they must be fundamentally selfish and uncaring; if they were wrong, they must be ignorant or stupid, etc. Therefore, apologies represent a major threat to their basic sense of identity and self-esteem.”  5 Reasons Why Some People Will Never Say Sorry by Dr. Guy Winch Ph.D.

I had to read that paragraph several times before I was able to really comprehend what the author was saying, and it hit home.

Sometimes when I apologize I’m afraid my apology will cause an implosion inside, as though the admission of wrong will expose what I’d thought to be true all along.  I failed so I must be a failure.  And that makes me feel vulnerable and insecure.  And many times “I’m sorry” makes us feel more vulnerable than we’re comfortable with, and stepping out of our comfort zone is not, well, comfortable, so…we don’t.

The apology, even if it’s deserved, goes unsaid.

I can’t tell you how many times this exact scenario has played out in my life.  Something else has been playing out in my life lately too.

For the past few months I’ve been working hard to develop my cardio.  I want to be able to walk a flight of stairs without huffing and puffing and needing oxygen at the top.  But, I’ve found my body hates, okay, strongly dislikes, the work involved in getting in shape.  If you are one of those people who loves to work out and finds it fun and even exhilarating, we probably won’t be best friends.  I work out because I like jelly doughnuts.

I was on a machine in the gym the other day and my muscles were screaming, “STOP IT!!”  I’m pretty sure I looked like I was about to die. I felt so very conspicuous, so obvious and maybe even a little stupid.

But, in my mind I knew the benefit if I pressed on and finished, so, reluctantly I did.  Once I had some time to recover and drank some water, the feeling of accomplishment overwhelmed me.   And I realized that feeling meant more to me than what someone might think if they happened to see me almost dying in the gym.   I may have looked and felt foolish, but knowing I had done it was worth it.

So as I stood there in the hall with the phone still to my ear and the sting of the words still on my tongue, I realized something.  I had done the right thing.  I had confessed and apologized.  I felt badly for telling news that wasn’t mine, and even though my initial instinct was to protect my fragile ego, I had pressed through the embarrassment and done the right thing.

And it felt pretty great, maybe even better than I’d felt at the gym.

You see, saying sorry doesn’t mean every negative thought you’ve had about yourself will be proven true.  It simply means you’re willing to acknowledge and own up to a bad decision or behavior.  That’s all.  You’re willing do the hard thing when it would be so much easier to not to, willing to open yourself to the painful feelings of being vulnerable when you’d rather hide.

Willing to accept responsibility when you’d really rather not.

Well, my friend did forgive me, although it may take a while for trust to be restored and I think I can live with that.   I have the peace of knowing I did the right thing and no matter how it may feel or look in this moment, I know the results are going to be worth it.

And, as if that weren’t enough, I climbed a flight of stairs the other day and I didn’t lay down and die at the top.

“Most of all, love each other as if your life depended on it. Love makes up for practically anything.” 1 Peter 4:8 The Message