I told you before that I am not a fan of flying.  The Lord helped me so much when we flew TO Europe, I figured I would face the flight home when I got to it.   What might be a little surprising is I don’t have a fear of fast moving trains.  I mean, not really.  Probably not any more than the next guy.  We boarded a very fast train for our journey from Germany to France.  I mean FAST.  At one point we were going close to three hundred kilometers per hour (about 190 mph).  Someone asked me if you could feel the speed?  Honestly, I couldn’t really.  I could see out the window before sunset that it was moving at warp speed, but the ride was comfortable.

After a few hours of speeding through the countryside and through a few cities, we arrived in France. From there we got on a subway that would take us to the outskirts of Paris where we were staying.  It was late, dark and we were exhausted when we unloaded at our stop with ALL of our luggage in tow.  I remember so clearly stepping off the subway, boarding a steep escalator and emerging at the top in a subway station in Paris. 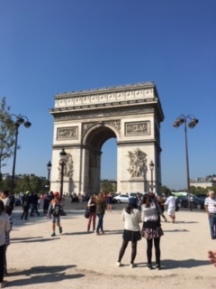 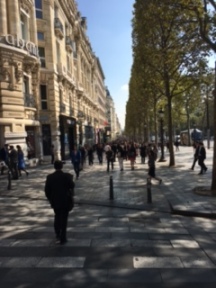 It was beautiful and different and amazing.  What word can I tell you that would adequately describe what it looked like to me?   Of course I had my phone out taking pictures.  I couldn’t take in enough, my senses were overloaded and all I could do was smile.  I wanted to jump for joy, but I was too tired and my luggage was too heavy!

It took a few minutes, but we finally got checked into our room, and when I laid my head down for the night, I thanked the Lord again for the trip.  I daydreamed about what we would see the next day and wondered if I would be able to sleep.  Well, I found out the answer to that question quickly as the next thing I remember was waking up to a bright, chilly beautiful morning.  It was as if the universe was smiling on us, welcoming us to another part of the world.  We got up, dressed quickly, well, as quickly as I can get dressed.  Some of us need longer than others to lift, tuck and cover all the right places.   We then headed downstairs to breakfast and began to figure out where and how to start visiting this amazing place. 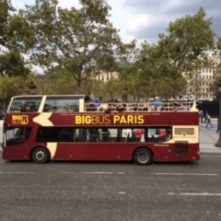 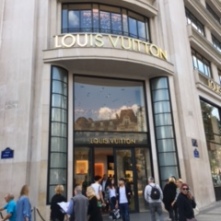 We decided to start by buying tickets to an “on and off” bus.  Basically you hop on and off as the buses make multiple stops at the most popular tourist attractions.  Once we had our tickets in hand we headed back down to the subway station and hopped in a car headed back into Paris.  Okay, so, who knew it would be so tricky to get OUT of the subway station?  Seriously, after the forty five minute ride on the train and then getting off in an unfamiliar place, we thought we had faired the toughest parts.  Well, let me give you a piece of advice: learn the phrase, “How do I get out of here?” in French before you ride the transportation system.  It will save you much stress and time.  I am not sure how many tunnels or staircases we pilgrimaged, but it wasn’t just a few.  Again, we were walking in circles, bringing back conflicting feelings of the airport.  I don’t even remember exactly how we got out, but we finally saw sunlight and headed toward it until we were standing on a street in downtown Paris, France.

Pause for a moment and take it in.   PARIS.

Oh my, the sights, the smells, the beauty, all of it overwhelmed my senses.  I wish I would’ve had one of those cameras that have the 360 capability so I could show my first real sights of this renowned city to all of you.  It was marvelous.  The first real historical sight we saw was Arc de Triomphe.  It was stunning and huge and full of character.  It was also smack dab in the center of a “round about” that must’ve had three thousand cars on it at that moment, all fighting to be in first around the curve.  I have never seen such chaotic traffic in my life.  Of course, I haven’t been to very many places that might have that kind of traffic either.  It looked like a migration of birds in the southern winter. They fill the sky and look like a scattered mess, but none of them fall out of the sky because they understand the order of their mess.   That’s what these folks understood too, the order of their traffic mess.

We stood and snapped pictures along with several hundred others.  It was such a busy bustling place.  Then we started down the Avenue Des Champs Elysees, one of the famous shopping districts in Paris.  Wow. For this working class girl, this street was like something you’d see in Hollywood, I think. Just guessing since  I’ve never actually been to Hollywood.  One name brand store after another, pricey cars lined the curbs, café’s with white linen tablecloths sat proudly on the sidewalk covered by white tents.

It was a shopper’s dream.

We spent a lot of the morning on this street and had lunch at a café.  Then we found a bus stop for our “on and off” tickets and waited in line for the bus to maneuver the crazy traffic and pick us up.  We elbowed our way on the bus and climbed the narrow stairs to find a seat on the top. Did I mention it was a double decker?  So cool.  We rode around the city and listened to the prerecorded tour they provided along with a free pair of earbuds.  Such rich history, it made me realize how young our country really is.

We made it to the Eiffel Tower and elbowed our way back off the bus.  There is a line for everything there, from tours to food to restrooms; everything. So we found our place and waited to buy tickets to be hoisted high up into the metal bowels of this monstrosity.   Several have asked me if we made it all the way to the top. The answer is no, we did however, make it several stories up and could see the entire view of Paris. 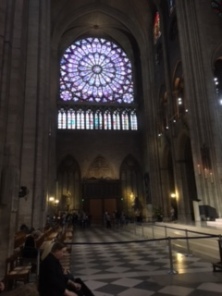 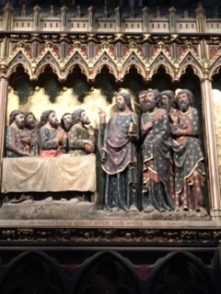 I’ve also had several ask me if we felt like we were in any danger since the bombing on Bastille Day had happened only two months earlier.   You know, I really didn’t feel I was in any danger.  There were soldiers carrying large guns at all the popular tourist sights, but I never felt afraid.  It felt safe and welcoming.

The next day we headed out to see more of the city.  We saw the Louvre, which houses the Mona Lisa and the legendary glass pyramid that was made famous in the Da Vinci Code.  We saw government buildings, historical monuments, and city life at its finest.  One stop we made that I didn’t expect to be so moving was Notre Dame.  Maybe you already know this, but I didn’t realize it was still a working cathedral.  The whole time we toured it, there were candles lit, people in confession and intercoms playing “shhhh” for the crowds to be quiet.  It took seven hundred years to build this beauty; it actually started as a quaint, simple church.

I am comforted to know that it takes a long time to create true beauty. 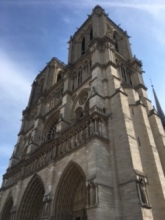 Way too quickly our time in this magical place had come to an end.  I saw so much and tried new foods, drank more cups of coffee than I care to admit and took more pictures than anyone would ever want to see; basically, I fell in love with Paris.

But, alas, it was time to start the last part of our journey, the reason we came; our half marathon.

According to the phone app we had along with us, we had already walked close to 30 miles in our tours of Kassel, Germany and Paris, France, and now we were facing a thirteen mile run.  My nerves were a wreck the morning I woke up for the event.

I had worked so hard and it was time for the moment of truth.

I could go on and on about the adventure of my half marathon, but I will keep it simple and just say “I did it!”  That is a BIG deal for a forty something year old mom of three.  I am no athlete, not by a longshot.  But, I trained hard and finished strong.

I am proof that most anybody can do something really hard if they put their mind to it. 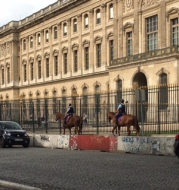 So much of this trip was about fun and sightseeing, but there is a very real aspect here that I don’t want to miss.  The joys and accomplishments in life only come when we face our fears and work hard.  There’s just no way around those two principles.  The sense of sheer happiness that comes when we face and overcome things we thought we couldn’t is more valuable than any amount of money or number of things.  It takes a desire to live your life to the fullest, a determination to make a difference in the situation God has placed you.  It is worth all the effort and tears, life is just too short not to give it your ALL.

Challenge yourself and pray hard and work toward your goal.

Well, after nine amazing days, the time came to return home.  I gathered my courage and boarded the plane, took my place in coach and watched movies the whole flight.  I have to be honest, America was a sight for sore eyes!  And, thank you, thank you, thank you, everyone around me spoke English.  I will never take being understood for granted again.  It was pretty amazing to see my husband too, I’m certain I talked his ear off from the moment he saw me emerge from the airport.

In English, of course.

One thought on “Doing Hard Things, the end”