I am so keenly aware of kindness as I travel this week. I am in a foreign country and I only know one person besides the friend who’s traveling with me. I am unfamiliar with the transportation system and do not know a word of the language. I am carrying a large backpack and a mid size piece of luggage stuffed to the gills. It is all stacked on top of each other and clumsily pulled along on two insufficient wheels. Unless I hoist the backpack on my shoulders and then I have a camel like hump that tends to knock over anything in my wake. Everywhere I go I am bumping into someone and trying to express apologies despite the language barrier. Basically lots of hand motions and facial expressions.

To say it is stressful would not be an understatement.

But in the midst of all this chaos and cluelessness, I am overwhelmed and overjoyed at the opportunity to be taking steps in another country. I am amazed how everyone looks the same. I mean, the people would look no different than if you were in any big city in America. Life is happening over here. People bustling to get to work and to get home, embracing their children and sporting the fashion. I feel a part of something much bigger than when I left my home forty eight short hours ago.

There is an entire country of people just like me, only different, living their lives and loving their families. Only five thousand miles including an ocean separate us.

I am realizing that humankind is so much more expansive than what I think of from day to day. I’ve studied different countries and seen films, but being here, I don’t know, it just makes it all seem real. Seeing their faces and hearing them laugh causes me to see them as human beings, not a faceless society as they were in my mind before.

In my time here I am already thankful for the kindness of some.

Like the helpful lady in the airport in Germany. I opened my phone to connect to wi-fi and it was all in German. Of course it was. I searched until I found someone with a helpful smile and asked her what to do. She was so kind and helped me to connect so I could communicate with family and friends. I didn’t realize how scarce wi-fi would be over here or I would’ve thought twice about signing up for a month of international phone service, even though it cost extra. But, because of her kindness I was able to contact the person trying to find us in the VERY large Frankfurt airport, and let my family know I had arrived safely.

The young lady on the train ride after we left the airport was also helpful. Although many do speak a bit of English here, some do not. As we got on the train I was separated from my group, and a bit horrified when no one around me knew my language, until Mareike spoke up. I wanted to hug her, but instead I grinned and thanked her immensely as we spoke about her life, studies, travels and family. Then she helped make sure I got off at the right stop. She was headed to pack up her apartment and move to Spain for further studies.

I will never forget this kind, twenty-three year old. 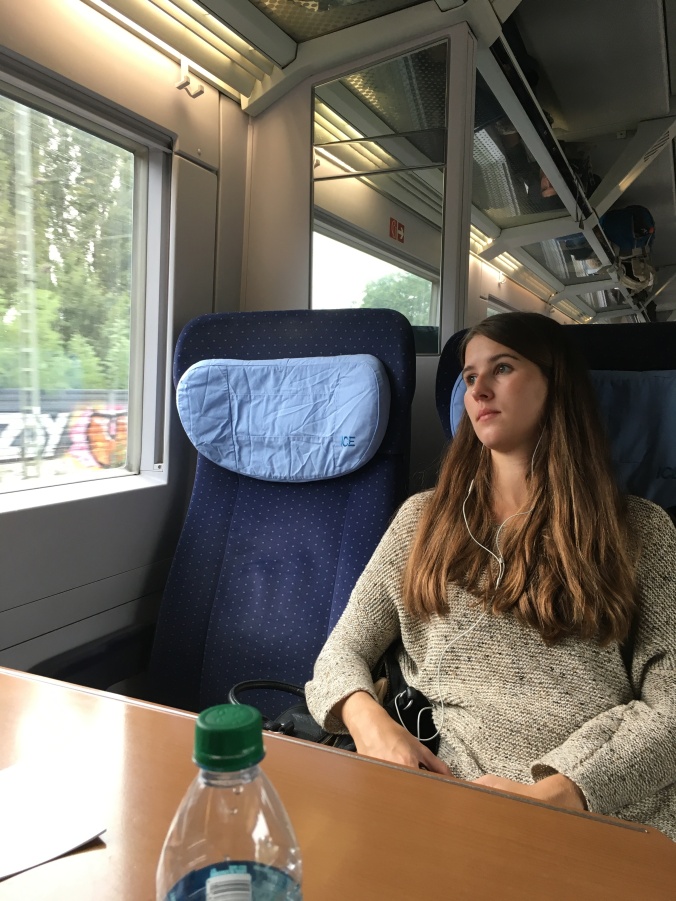 And then the hotel owner who showed such grace as we communicated with him in broken German. He even called a friend who spoke English to interpret what we were asking for. The room was nice and perfectly quaint, with a coffee shop right around the corner. As a matter of fact there is a coffee shop or a bread store on nearly every corner. As a coffee lover, I have fallen head over heels for this country. It seems the coffee shop baristas know a decent amount of English so ordering a hot treat has been a breeze.

God is good to accommodate my coffee addiction.

Once we were checked in, we walked eight miles around the city we were visiting. Eight. Miles. After two plane rides, a bus, a tram and finally a train to get here. THEN we walked. I am thanking the Lord for my ability to walk and see, too many times I take those things for granted. And even though my feet hurt, it was totally worth it!

As I lay my head down tonight I have been up for thirty six hours straight. But even jet lag can’t hold back my excitement. Tomorrow we see Paris, France. I’m full of joy and thankfulness for this opportunity, I plan to make the most of it. And I plan on practicing greater kindness as I’ve been so fortunate to receive so much here.

Oh, and one more thing, if you come in September, bring Kleenex, and a light jacket you won’t regret it.

And smile a lot.

One thought on “The Kindness of Others”