It was another long night.  Up again with stomach pain, walking the floor, waiting for the medicine to work so she could go back to bed.  Life shouldn’t be so hard.  People shouldn’t get sick, suffer and die.  It felt like there was a chasm the size of the Grand Canyon in her heart and the pain manifested itself in her stomach.  Again.  It seemed there was no expiration date on grief.  No promise that it would all be better.  Just a hope that she would be able to eat and sleep again someday was all she held onto.  It had been a rough year and she missed her mom.

The holidays just didn’t feel the same without the presence of one of her favorite people.  The lights on the tree fell flat, almost as though they understood that to shine too brightly would somehow be false and insensitive.  The gifts were packed tightly under the tree, representing all the people in her life she valued so much, except one.  One very important one.

Nothing seemed the same, it all felt so forced. It was impossible to sing about merry times when all she wanted to do was cry and cry.  Would Christmas ever be happy again?   Would life ever feel whole again?

So many thoughts flooded her mind as she walked.  She had to work tomorrow, how would   she ever get through the day with so little sleep?  How many nights in a row had it been since she slept soundly?  Oh for former days and nights to define her present again. The days before the diagnosis and illness. Back when everyone was represented around the Christmas tree.

She had learned from experience over the past several months that the only thing to do at this hour of the morning was pray.  Others were sleeping in the house and because she didn’t want to wake anyone, turning on lights was not an option.  No matter, the darkness was a reflection of her soul anyway.   She missed the light.

“Father, please…”  It started with such familiar words, she didn’t have to think twice to begin.  How many times had she uttered that phrase lately?  How many ways had she ended that sentence?  So much to pray for, so many feelings to sort through.  Sometimes those were the only two words she could force out, and then she would allow the groanings of her heart to communicate with her heavenly Father.  He was the only one who truly understood her, probably more than she understood herself.

Thinking over the last year, she had so many things to be thankful for, and she was.  It was just this nagging sorrow that felt relentless.  Morning, noon and night.  There was no break.  And this night as she walked the floor and prayed, she understood more than ever that things were never going to be the same.  In order for life to find its way back to joy, something had to change.  The most obvious answer was her heart.  So again, she spoke into the darkness.  “Father, please, heal my heart.”  She had spoken that prayer at least a thousand times before, but, somehow tonight it seemed to penetrate the walls that had been carefully constructed to help hold herself together.

Christmas was always her favorite time of year, since she could remember.  No matter what else was going on in life, Christmas was always just what the doctor ordered to make everything okay again.  The scents, colors, spices, presents and glitter of it all made getting out of bed each morning a joy. And lingering into the night to enjoy the blinking lights on the tree became a treasured tradition.

It was the tree that helped make the house feel so festive.  Full of ornaments that dated back to the days before she had any children all the way to the present.  Unpacking the ornaments and hanging them on the tree each year told the story of their family.  Marriage, the birth of their three children, awkward elementary ornaments that bore the print of a tiny hand or a wreath that circled the face of a middle schooler.  So many treasures hanging off the limbs, it was impossible not to smile just looking at the overloaded branches.  A reminder of all the joys in her life.

She had been reassured that time would help to heal the wounds of her heart, and if she was honest, it had.  Her heart did not feel as raw as it once did.  The pain had become more of a longing.  What she wouldn’t give to hear the voice of her mom one more time or see that beautiful smile.  And so, she continued her earnest prayer, “Heal my heart, and help me to feel joy again.  Help me to be thankful for the many years we had together.  Teach me how to live my life to the fullest.  You left me here for a purpose, and momma is having the best Christmas she’s ever had in heaven with you.  Let me feel you near, Father, I cannot go on without you.”  It was a prayer of desperation, but somehow she knew that He had heard.

In the depths of her heart she understood that loss had taught her what really mattered in life.  It was amazing how grief had brought such clarity.

In the coming days her children would be home for the holidays.  She looked forward to every single hour and minute they would be together.  The time spent with the ones she loved meant much more than anything that could ever be wrapped and put under a tree.  The laughter and memories that were sure to be made during the season would be a treasure in her heart.  She would tuck them away for another night like tonight when she felt so fragile and broken.  Then she would replay each scene in her head.  Making cookies and eating too many together.  Shopping and spending too much money.  Coffee dates and meaningful church services.  Laughing and looking at old pictures.  Memories of those times would see her through.  They would wrap her up like a warm familiar blanket and warm her soul.

As her thoughts wandered in the quiet night, the Lord began to speak to her heart, and she listened intently.  She needed a way to be reminded of the good, the ways God had answered prayers even in the midst of the greatest loss of her life.  Something that she could think about day after day.  A reminder.

She thought about what she had read in her devotional book that morning.  Her scripture was in the book of Joshua. The story where the Israelites crossed the Jordan River and the Lord told them afterwards to bring twelve stones together and pile them up on the shore to make an altar.  He instructed the people to tell the story of their miraculous crossing each time one of the children asked what the piled up stones was all about.  It was a visible way to remember.  God had been faithful and He would remain faithful.

“Remembering stones.”  That’s what she needed.  Not literal stones, but reminders to help her not to forget the happy times her family had shared and would share in the future.

There was no better time than the present to put into action what God had laid on her heart.  She was desperate for wholeness.  She began to formulate a plan.  Each day she would write a note, something good or memorable that had happened that day.  She would then put it on her brand new “thank you” wall.  It would be a way to remember all the good that was sure to happen in in the days ahead.  And when she needed encouragement or lifting, she would read them  and be reminded.  Life was still good.

The whole idea sparked just the tiniest bit of excitement in her heart and she realized her stomach was finally giving her some relief.  Time for bed, tomorrow was a new day and somehow it didn’t feel quite as daunting.  She was ready to start looking for the good and ready to write her first thank you note.

She suspected it was going to be a good Christmas after all.  At the very least a thankful one. 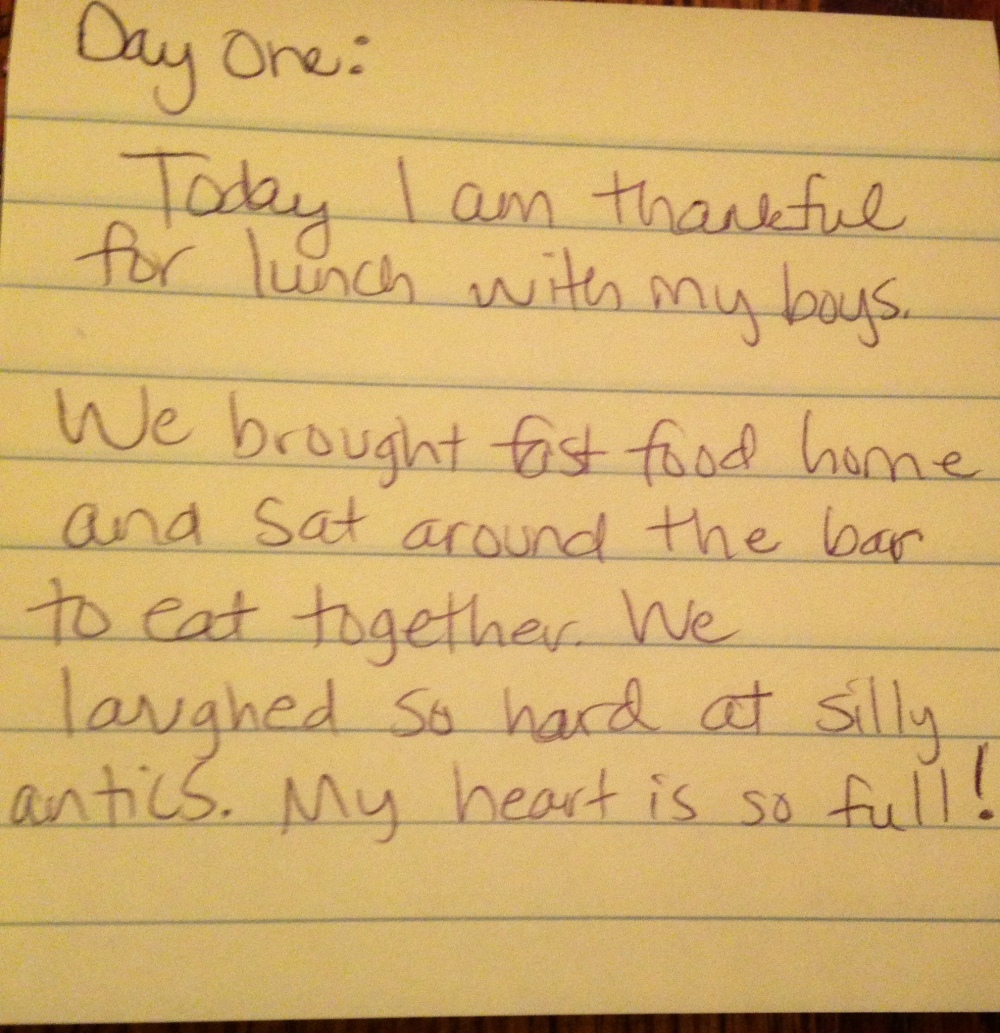 Scripture that inspired the story…

“When the whole nation had finished crossing the Jordan, the Lord said to Joshua, “Choose twelve men from among the people, one from each tribe, and tell them to take up twelve stones from the middle of the Jordan, from right where the priests are standing, and carry them over with you and put them down at the place where you stay tonight.”

So Joshua called together the twelve men he had appointed from the Israelites, one from each tribe, and said to them, “Go over before the ark of the Lord your God into the middle of the Jordan. Each of you is to take up a stone on his shoulder, according to the number of the tribes of the Israelites, to serve as a sign among you. In the future, when your children ask you, ‘What do these stones mean?’  tell them that the flow of the Jordan was cut off before the ark of the covenant of the Lord. When it crossed the Jordan, the waters of the Jordan were cut off. These stones are to be a memorial to the people of Israel forever.”

Look back over the journey.