My husband arrived a few minutes later and we wept, prayed and mostly sat quietly and stared at our son while he slept.  It was a sobering night; not knowing what the morning would hold.  Our hearts were broken.  As the day dawned, the doctor came in and told us that she would keep our boy on heavy doses of antibiotics and see how his body responded to them.  The blood work was inconclusive.  Still, everyone who came in and out of the room wore a mask.

It felt so aseptic and serious.

Meanwhile our little guy woke up and seemed to feel better, again he wanted Sponge Bob but this time no blanket.  Throughout the day he began to talk more and laugh some.  And then it was night again.  My husband and I held each other and prayed and cried the night away.  The next morning brought more hope as our sweet boy began to play in his bed and ask for food.  I have never before or since watched so much Sponge Bob, but I will forever be grateful for the silly optimistic character.  He laughed and laughed at him the third day and then it was time to go home. He felt so much better, but we still worried, what if the fever came back?  When the doctor visited that final morning, she told us she’d scheduled a visit with a doctor who specialized in blood.  We left feeling thankful, nervous and so grateful that our child seemed so much like himself.

We had a few days before his appointment with the specialist and things seemed normal enough.  I guess if you call checking on him several times a night, watching his every move and crying yourself to sleep normal.  I felt I was a failure as a mother, I didn’t trust my instincts or my ability anymore.

I was so completely broken.

The appointment day arrived and we made the trek to the new doctor in another town.  What we saw when we arrived took our breath away.  We knew we were seeing a specialist, but we didn’t know we were seeing the oncologist.  We weren’t familiar with the medical terminology and didn’t realize that this type of doctor checked your blood and treated kids with cancer.  I’m telling you, until you’ve experienced someone using your child’s name in the same sentence as the word cancer, you cannot understand what the heart goes through.

The doctor’s office was in a children’s hospital so there were several waiting rooms ranging from ear, nose and throat specialists, kidney and bladder doctors to the office where we sat for children who had dangerous unpredictable diseases.  It was the scariest day I had ever lived and I wanted to curl up into a fetal position and cry and cry.   But, as the parent, you have to be strong (at least pretend to be) and try to keep things normal for your observant child. We signed his name on the check-in register and sat down and waited for our turn.  Our little one immediately spotted a table with a car track and some hot wheels and he was off like a flash.  My husband and I sat there in cold, unforgiving chairs like two statues.  The walls were glass so you could see into the other waiting rooms, like a fish bowl.  I remember thinking over and over how much I wished I was on the other side of the glass in a different waiting room for a different reason. And, of course, well-meaning parents of those other healthy children look at you sadly with mixed feelings of sorry for you and yet so glad it wasn’t them.

I didn’t blame them.

Our names were called and we made the short yet endless walk back to the room to wait for the doctor.  It honestly felt like I couldn’t breathe.  What we would learn in the next few minutes would change our lives forever.  No matter what the doctor said, we would never be the same after this.

Thankfully, it didn’t take long for a kind looking older gentleman to walk into the room and break the icy cold air between us.  The walls of the room felt like they were closing  in on me.  I knew as he looked at my son’s chart I would never forget what ever came out of his mouth next.  He had the gentlest looking blue eyes and white hair.  He looked up and spoke the most beautiful words I’d ever heard, “this isn’t cancer.”  All the air left my lungs.  I stuttered and said, “Can you please say that again?”  And he did.  “This isn’t cancer, looks to be some type of auto immune disorder possibly.” All I heard was “not cancer.”   It felt like my world righted.  Whatever else he said didn’t really sink in, we could live with whatever it was, we didn’t have cancer.

We were sent downstairs to give more blood.  And then we went home.

How do you process the emotions from an experience like that?  How do you just go home?  That was the most difficult thing, arriving home and trying your best to act normal and feel normal even though a category five hurricane had ravaged your soul.  There was no longer such a thing as normal, a new normal was born that day.  And every day after was forever changed.  We would never take simple things like checkups or birthdays for granted again.  I still don’t.  I LOVE to celebrate birthdays and this is one of the reasons why.

After many weeks of waiting and more bloodwork, we were finally told that he was fine and the reason for his sickness was never determined.  Oh, we have our theories, but never any real diagnosis.  I watched him like a hawk after that.  Any minor sickness scared me to death and I prayed and prayed that I would be able to sleep through the night without waking up and feeling so afraid he was sick and I had missed it again.  One morning after an especially bad night, I looked in the bathroom mirror with swollen eyes and tears streaming down my face.  I began to recite a scripture that remains dear to me to this day, “for God did not give us a spirit of fear, but of power and of love and of a sound mind.”  II Timothy 1:7. I quoted it out loud to myself over and over that morning and for days and months after. I longed for no more fear and a sound mind.  It took months and years for me to relax into my parenting again.  For me to trust my instincts as a mother.

It was so hard.

That was in 2006.  Eleven years ago.  Still feels like yesterday sometimes.  He did recover fully, slowly but surely.  He played games and sports like most every other little boy.  I never took it for granted, still don’t.  He was in seventh grade when he joined the cross country team.  He was so small then, unlike now.  He stands six foot three inches tall, a high school senior who has run too many races to count. Those once weak little legs now carry him mile after mile.  He is one of the best runners on the team and has won a few ribbons in his day. It has been such a joy to watch him run and be strong in heart and body.

Which explains why I was so excited and nervous standing there waiting on him to round the cluster of trees and run by me.  Seconds and minutes ticked off the clock and I stood there practically holding my breath.  Several more fans had gathered to cheer on their own favorite runner.  As the athletes began to appear the crowd around me erupted with cheering and waving, encouraging their favorite as best they could.  Not too far behind the front runners was my boy, light brown hair flowing behind him.  At this point, I was flailing my arms and hollering, urging him onward.  I hope I’m never captured on video during a race, some things you never want documented, you know?!

Once he passed, I ran to another mile marker and spurred him on as he sped past that one too.  And, then it was time for the finish.  There I stood, a few hundred yards from the finish, waiting.   When he was close enough to hear, I hollered to him what I have said at least a thousand times over the years,  “Keep going, don’t give up, you can do it!”

He crossed over the line with his best time ever and placed in the top twenty in the state of Alabama in 3A schools.  He was exhausted, sweaty, and all smiles!  There’s nothing like working hard and having it pay off big.

And, for this mom, there’s nothing like watching your son whom you wondered would walk…run.

I was standing in my bedroom recently when I felt the Lord telling me it was time to tell his story.  A story of God’s faithfulness, how he restores and heals in His time.  I don’t know why my son got so sick, I may never know.  But I do know that his story is pretty remarkable.

From powerless to walk to running with power.

I am so thankful to be at this point in the story.  Living through sickness and overcoming the fear and worry in the long season that followed is something I hope I never have to live through again.   But, if I do, I know from experience that God will be there, holding me close.

Just like that long ago night in the cold dark hospital room, wrapping his arms around me.

After we had been home from the big race a few days, we noticed Travis had left his racing spikes on the back porch.  I know you are wondering why that matters.  It doesn’t really.  What does matter is what we found on them.  Masking tape.  Two small strips, one for the back of each shoe.  On the tape was written in black sharpie “Hebrews” on the left shoe and “12:1” on the right. 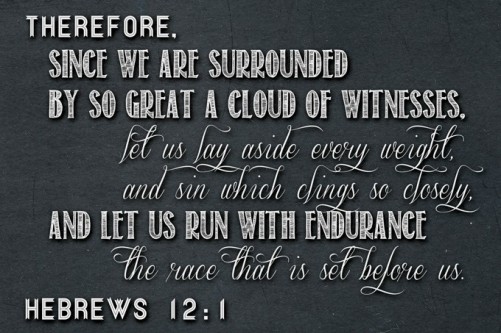 My eyes welled with tears and I smiled.  Oh yes, we had run.  But, not just in the expected way.  We had run the race of life.   As a matter of fact, we are still running it, every single day.

Wherever you are in your own personal race of life, don’t give up.  Finish your race with integrity and with all of your heart.  Look around you and encourage those who are running as well, we all need to be lifted up and spurred onward.   Take heart!  And run!

And as you run, look for Travis, my miracle runner.