If you had told me a few years ago that our lives would look like they do today, I would’ve thought you watched too many television dramas. But, here we are and, like it or not, life has dealt us a difficult hand. Somehow, we’re still standing to talk about it.

You know there were times in the last two and a half years I thought you might literally die of grief. Watching you stumble through the loss of your childhood sweetheart and soul mate was nearly as hard as losing my sweet momma. I remember for the longest time after she passed, you called every day and asked me to lunch. We would sit in tearful silence or pretend to make small talk about nothing and everything. It was so hard. I would leave you feeling like the weight of the world was on my shoulders. Many times I would sit in the parking lot at work right after lunch and have a good cry before going in to finish the day.

I think I cried all the time back then.

My heart would nearly burst every time I drove into the cemetery and see your silhouette from afar. The picture of you standing by mom’s gravestone, shoulders slumped, head down talking into the air as though she were right there to listen, is forever burned into my mind. I think those times alone with mom at her final resting place telling her about your day as though you expected an answer was the only way you knew to cope with the devastating loss of your very best friend.

Forty eight years, a life time of doing life together, refuses to be extinguished just because one of you is no longer there. Thousands of cups of morning coffee for two was suddenly one, you survived the chasm of waking up to an empty house by bringing a cup to the cemetery bright and early each day. I worried about you for such a long time and wondered when you would stop going there so often, and secretly I worried you would stop going and another piece of mom would slip away.

None of what I was feeling made sense.

We’ve struggled, tripped, crawled and finally walked for the past years and months to find some sense of normalcy, only to find that there is no more normal, it died with her. So, we asked God for a new normal, something that would help us heal and bring us relief from the unforgiving pain of loss.

And in his mercy, he did.

As relentless as grief can be at some point the wound begins heal because of the tender balm of the Comforter.

Time passed and the lunch calls became less frequent, the cemetery visits weren’t as often or as long and you began to have conversations that didn’t end in an emotional breakdown. And ever so slowly, like molasses dripping on a summer day, a new love began to seep into your heart. I think it took you by surprise as much as anybody. I’m sure you never expected what the Lord was going to do next in your life, not in a million years.

It started with an innocent invitation. I think you were simply looking for companionship and so was she. One night out turned into another, and another and one thing led to another until you realized the Lord may have something more for you. And for her. Something neither of you ever imagined…

Not the young love that comes with reckless abandon, but a seasoned love that has been tested and tried by the difficulties of life and emerges like the birth of a child. So very painful is the labor to bring it forth, but its arrival brings the greatest joy.

I can’t tell you it’s been easy to wrap my mind around this thing you were trying to explain to me sitting in the sandwich shop several months ago. I’d never seen you hold the hand of anyone except momma, and I wanted to know what was happening and why. This was all new territory and it felt foreign and uncomfortable. I wasn’t sure I liked it. To be honest, I guess I never really thought of you as a man, you were always just my daddy.

To see you dating caught me completely off guard.

And even though the idea of someone else was so hard to accept, I couldn’t deny the light that was back in your eyes, or your smile that was broad like it used to be, or your big laugh that had returned; it was the sweetest sound to my ears.

She was bringing you back to life.

Everything had felt like death for so long, the brightness of life felt like warmth in the depths of my cold soul. It felt like hope. This new woman who had caught your eye was humble and kind and loved momma back when she was still living and breathing. She too had been alone for so long and I noticed she smiled more frequently when you two shared company.

It was beautiful really, and sad.

I mean, how would I ever get used to someone besides momma sitting close to you in church or sharing knowing glances across the dinner table? Acceptance of something new felt like betrayal of what was. Why does it have to be so hard? I long to be a kid again sometimes, to run and play and not have a care in the world. I don’t want to have to deal with any more hard things, I want an easy button. But, life never makes it easy, and feeling one emotion at a time is impossible it seems; there’s always several to sort through and process. So one day I was happy for you and the next I just wanted the whole thing to go away and for life to be as it used to be, back and forth I would swing.

But, scripture has proven to be true once again.

I read somewhere a long time ago that love doesn’t always come sweeping in and knock one over, sometimes it comes in quietly and unnoticed at first. That is how I feel about your new relationship and your upcoming big day. Like I’ve been slowly won over by the unstoppable power of love.

It doesn’t hurt as bad to think about someone else sharing my maiden last name as it did in the beginning. And when I stand up in church with you while you’re next to her, I’m sure I will be a basket case of emotion. When you promise to love and treasure until the end of your life, I will weep a little in my heart and remember how you made that promise to another woman a long time ago; and you kept it. Then we’ll celebrate with cake and punch and we’ll throw rice and cheer you on your way. I’ll laugh and cry and thank the Lord for this new normal, the one we prayed for but didn’t know what it would look like.

I guess now we do.

Once the festivities of the day are all over and the last white bow is put away, I’m going to find myself a cup of coffee and head out to the cemetery where momma is laid to rest. I’m going to stand by her grave and spend some time talking into the wind about everything and nothing.

And then I’m going to do what we’ve done a hundred times before, I’m going to call you and set a date for lunch.

Just you, me and our new normal.

I love you, Daddy. 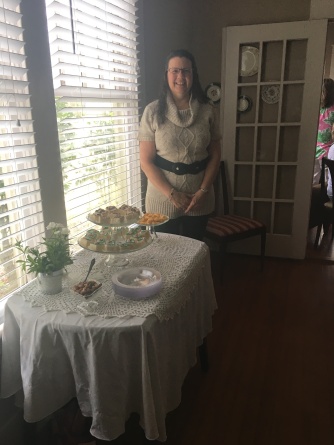 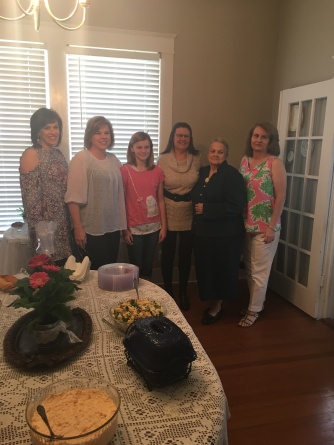 Part of our blended famiy.